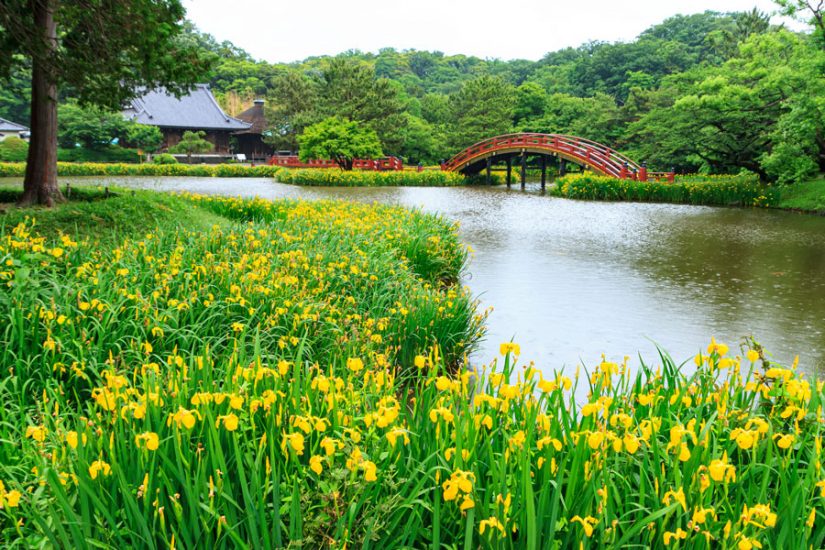 What are the elements of Japanese-style gardens?
Jan 14, 2021—culture

Japanese gardens take many forms. There are large, meandering stroll gardens, hilly landscape gardens that can best be enjoyed from a single vantage point, smaller gardens attached to teahouses, tiny interior courtyard gardens, and stony dry landscapes. However, all these gardens are put together using the same basic elements, and they recreate on a smaller scale the natural landscape of the Japanese archipelago with its islands and mountains, streams and lakes, its lush green forests and sandy beaches. Inspired by nature’s essential forms these gardens share a common sense of sanctuary and of peace, presenting a calm green space removed from the world in which one can pause a while, quiet the heart and still the mind.

Water is a common element in Japanese gardens, which often feature a pond, a stream, or a small waterfall. Even in karesansui (枯山水 — dry landscape gardens) water is represented by the patterns raked into fine gravel or sand. Mossy rocks may be added as islands in a pond, its edges may be bordered by a pebble beach, or a splash of living color may be achieved by adding koi carp. Frequently the water is crossed by bridges which may be made of wood or stone, arched or flat. Engetsu-kyō (円月橋 — “moon bridges”) have particularly high arches so that when reflected in still water, a full moon appears. Zig-zag bridges are structurally very stable, but they also force the walker to heed their route and encourage a more conscious awareness of the present moment.

The sound of flowing water adds a refreshing musicality to a garden, and this can be achieved with smaller water features. The tsukubai (蹲踞) is a small stone water basin which receives a flow of water from a bamboo pipe. Originally made for tea gardens, visitors would wash their hands and mouth here before joining a tea ceremony. Often nearby there is a suikinkutsu (水琴窟); part of the drainage system, it is a buried clay pot that creates a pleasant echoing sound as water drips into it. Another clever device is the shishiodoshi (鹿威し — literally “deer scarer”). A bamboo pipe is balanced on a pivot with its open end beneath a flow of water. When it is filled, the weight of the water causes it to swing down and empty, then swing back into place so that its closed end strikes a stone with a distinctive hollow “tock”. First designed to scare away agricultural pests, they are now a classic part of the garden soundscape.

Rocks are another essential garden feature; their hard permanence contrasting with the gentle rippling waters. Carefully arranged to look as if they are integral to the landscape, standing rocks may represent mountains, and flatter rocks may be used as stepping stones to cross streams or to protect a living mossy carpet. In dry landscape gardens, rocks stand like islands in a whirling sea of raked gravel. Usually viewed from a seated position such as on a wooden veranda, these stone vistas represent nature pared down to its most primal forms as an aid to meditation.

Another common and weighty ornament is the ishidōrō (石灯籠 — stone lanterns) which come in many shapes and sizes. Originally used to line the paths to temples and shrines, their fire boxes are often decorated with images of deer, the sun, and the crescent moon. The more weathered, aged, and moss-grown they are, the more they add to the garden’s gravitas. Yukimi-dōrō (雪見灯籠 — “snow-viewing lanterns”) are especially notable for their broad roofs that catch snowfall very easily, creating a quaint appearance in a winter garden.

Plants bring life and color to the garden, but the dominant hue is green, with pine, cedar and cypress providing an evergreen setting throughout the year. Onto this stage seasonal colors take brief turns to bloom, flourish and fade: plum and then cherry blossom in the spring, irises, azaleas, and hydrangeas through the summer, followed by the autumn maple, and winter camelias. Often gardens will employ shakkei (借景) or “borrowed scenery” as a backdrop. This technique incorporates scenery outside a garden, such as forested hills or picturesque temples, so that they appear to be a part of the garden itself. Such a view carries the gaze out and beyond the garden, suggesting a limitless unity with the natural world that has inspired such ingenious design. 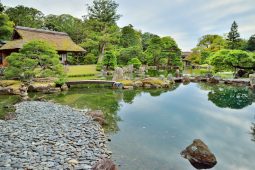 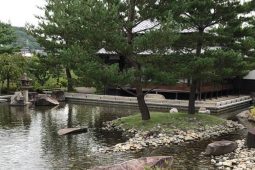 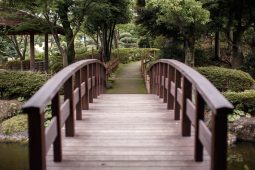