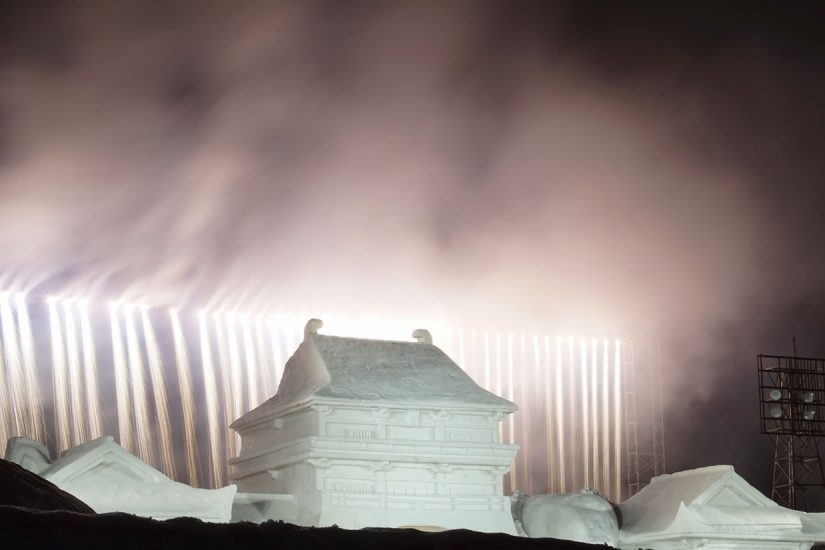 This may come as a surprise to you (it will not, I’ve mentioned it too many times), but it snows a lot where I live. I tell people this again and again, and show them pictures (in fact, here’s another one below), mostly because very few things are funnier than when they visit in winter and they’re still amazed by the amount of snow on the ground.

About two hours’ drive away from here (or an hour for some of my family, but I’m assuming reasonable drivers in this case), you’ll find Tokamachi, or ten-day town, following — in case you’re wondering — the naming scheme of neighbouring towns and cities based on how often the market opened there. The market’s gone these days, as far as I know, but it’s still a lovely town to visit. This isn’t one of my vague ’oh, you should go there some time’ articles, though; I’m suggesting going there for one very particular reason.

You’ve probably guessed by now that it’s the Tokamachi Snow Festival (Tōkamachi Yuki Matsuri). I’m not very good at keeping secrets. Japan has a few snow festivals: That is, festivals featuring absolutely gigantic amounts of snow piled and carved into incredibly elaborate sculptures. In the case of Tokamachi, this includes a concert above an ice stage, with an entire snow castle in the back, while — because this is a Japanese festival after all — fireworks go off still further in the background.

The most famous of snow festivals in Japan is Sapporo. This is true inside Japan as well; as is quickly turning into a theme in my articles, most people here haven’t heard of the Tokamachi one, and no, I’m not actually sure why this is the case. Why go to one? …Well, if seeing dozens of absolutely massive, elaborate snow and ice sculptures by talented artists — some of which you’re invited to walk in or on — doesn’t appeal to you, then I’m not really sure what more to say. It’s a spectacular view every year for me, and I’m saying that s someone who doesn’t usually even like just walking around looking at things. All that’s wrapped up in a cozy city that’s nice enough to just walk around in even on an ordinary day, and fortunately, the warm indoors are only ever a short walk away. The fact that Tokamachi competes for one of my favourite places in the prefecture to get a meal doesn’t hurt either.

“In fact, let’s have some examples! The official site went through some changes recently and still doesn’t have any English on it as far as I can tell, but what it does offer for everyone is pictures. Click through to the right page and you’ll find all of 2018’s award winners.
Pay close attention to what’s next to the sculptures, as well. They’re usually much bigger than the photo makes them look.

But if you’re going to a snow festival anyway, why pick this over the more famous Sapporo? Well, for one, the Sapporo one starts at the end of January and carries on till the 11th of February next year, while Tokamachi usually starts around the middle of February and goes on for a couple days, so you don’t necessarily need to choose. Assuming you can only attend one, though… Tokamachi is closer for almost anybody, for one, because Hokkaido is about as remote as it gets for most people. It’s also warmer. No, of course it’s not warm if you go there in the middle of February, but it’s a bit below freezing, which is a lot kinder than any part of Hokkaido tends to be. It’s smaller and less crowded, too, which makes getting around a lot easier, and I don’t know if Hokkaido charges for anything, but I can promise that Tokamachi certainly doesn’t.

You’d also be helping them to recover if you do spend anything there — Tokamachi was hit really badly by an earthquake a few years ago (no, they’re not going for a repeat; it’s safe to visit, don’t worry), and they’re still coming back from that. I admit, this is almost local so there’s a bit of personal bias, but if that matters to you, it’s something to consider.

Back to the more obvious reasons, though: It has more snow. Yes, more. If you don’t live in a country with a lot of snow you might think that there’s a pretty direct relationship between how cold a place is and how much snow it gets, but the truth is that once it’s cold enough the rest mostly depends on other conditions, and more cold actually reduces snow (this is why people assume it’s well below freezing where I live, when it’s usually just above).

Tokamachi gets, by several reckonings, the most snow of any inhabited area in the world on a good year. That doesn’t mean the most in the world, it just means that everywhere else, people know better than to live there. The town has it well under control, though, and so long as you can handle icy roads (or take a bus, or walk), you’ll be just fine. What it does mean, though, is that everyone has about as much snow to work with as they like, which leads to a lot of really big and detailed sculptures, like you’ve seen.

One place where it loses out is that Tokamachi doesn’t expect international tourists so much. It’s not a complete stranger to the idea, but outside of some effort on the main site and a bit of signage, it’s not trivial for you to get around unless you speak at least some Japanese. The good news is that finding a place to stay and food to eat takes limited Japanese, while using a map with pictures and staring at sculptures takes absolutely none.

Oh, and the pictures, obviously. You can take pictures of just about any one part of the snow festival — even a nondescript wall of snow behind you — send it back home and most people will never believe their eyes, so that’s fun too.

If all that sounds like fun, then the good news is that you have a good half a year or so to prepare! Set aside a day or two (I suggest two, just so you don’t have to rush), get out there, and enjoy the spectacle.

Do remember to dress warm, though. I still remember every year I forgot to do that.