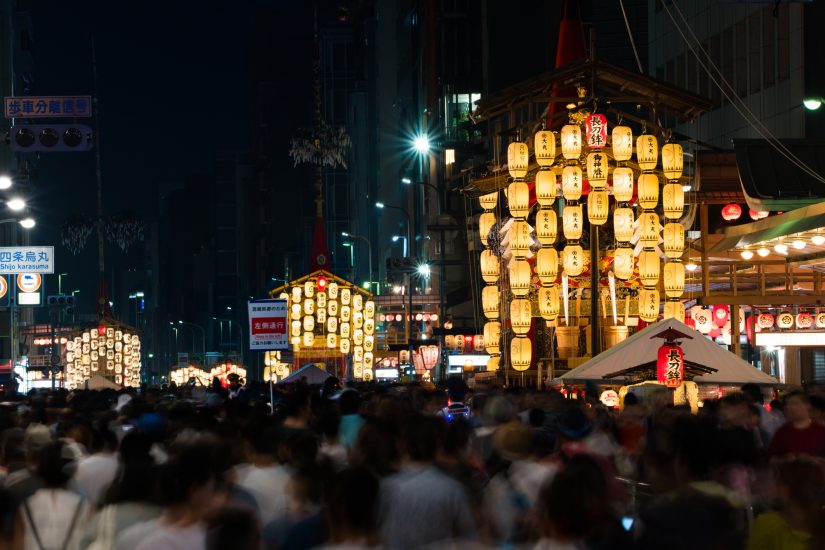 Summer is the season for festivals in Japan. When a matsuri (festival) comes to your neighborhood the night resounds to the beat of taiko drums, and people put on colorful yukata (a light cotton kimono) before promenading through yatai (street stalls) where delicious treats and carnival games await. Every town has its own special matsuri, many with a very long history.

Summer is the season for festivals in Japan. When a matsuri (festival) comes to your neighborhood the night resounds to the beat of taiko drums, and people put on colorful yukata (a light cotton kimono) before promenading through yatai (street stalls) where delicious treats and carnival games await. Every town has its own special matsuri, many with a very long history. Here is a rundown of Japan’s ten most famous festivals through the months of July and August.

This dramatic festival takes place in the district of Hakata in Fukuoka City and features two kind of decorated float. Kazariyama are colorful standing floats about 13 meters high that are left in various neighborhoods from July 1st. Kakiyama are smaller one-ton floats that are designed to be carried through the streets. On July 15th teams of men in traditional costume race through the streets of Hakata carrying these kakiyama to see which team is the fastest.

Gion Matsuri is one of the “Big Three” festivals in Japan and has been dated back to a 9th century purification ritual. It is a festival of many parts and technically lasts throughout July. However, the main events are the two float parades which take place on the 17th and 24th. These floats are called yamaboko and are richly decorated with antique brocades. On the three nights prior to each parade the center of the city is closed to vehicular traffic, street stalls selling food and drink are set up, and people dressed in yukata wander through this pedestrian paradise admiring the festival floats which have been set up in various neighborhoods. At the top of the floats are musicians playing traditional tunes with flutes, drums, and bells. During this period old merchant families in the city also exhibit their family treasures at the front of their house.

Tenjin Matsuri dates back to the year 951 and like Gion Matsuri, it is considered to be one of the “Big Three Festivals in Japan” (together with Tokyo’s Kanda Matsuri which takes place in May). Tenjin Matsuri is held to honor the Shinto deity of scholarship, Tenjin, and is centered on his shrine at Osaka Tenmangu. On July 24th various opening rituals are held at Osaka Tenmangu Shrine and there is a taiko drum performance. The main activities, however, are on the 25th and feature a colorful parade through the streets of portable shrines, costumed characters, dancers, musicians, and festive floats. The parade goes as far as the Okawa River where the portable shrines are placed on boats. There is then a river procession of 100 boats, some carrying portable shrines and others used as stages for traditional dramatic performances. In the evening the boats are illuminated with torches and the festival reaches its climax with a spectacular fireworks display.

Nachi-no-Hi Matsuri is a fire festival held at Kumano Nachi Taisha Shrine in the Kii mountains of Wakayama. A 1,000 year old purification ritual, it is one of the three biggest fire festivals in Japan. Every year on July 14th 12 portable shrines are carried down the stone steps of the mountain to the base of Nachi Waterfall. This 133-meter waterfall is Japan’s highest and is believed to be the home of a god. Here at the base, 12 massive torches are lit and then carried back and forth in procession by men in white robes. The flames from the torches and the mist that comes off the waterfall are believed to purify the portable shrines.

Sagimai is a ritual dance which was first performed in the town of Tsuwano in 1542, and is now a nationally designated Important Intangible Cultural Property. Sagimai means “heron dance”. In this ritual two dancers dressed as a male and female heron perform graceful steps about each other and spread their wings to a chanted song and the music of drums and gongs. The dancers’ costumes are distinctive for their tall heron-head hats, red legs, and white wings and altogether weigh around 15 kilograms. Sagimai is performed at Yasaka Shrine and other locations around Tsuwano. Recently, there is also a “chick dance” of local school children parading through the streets dressed as herons.

Check out Part 2 of this list for the August festival rundown!