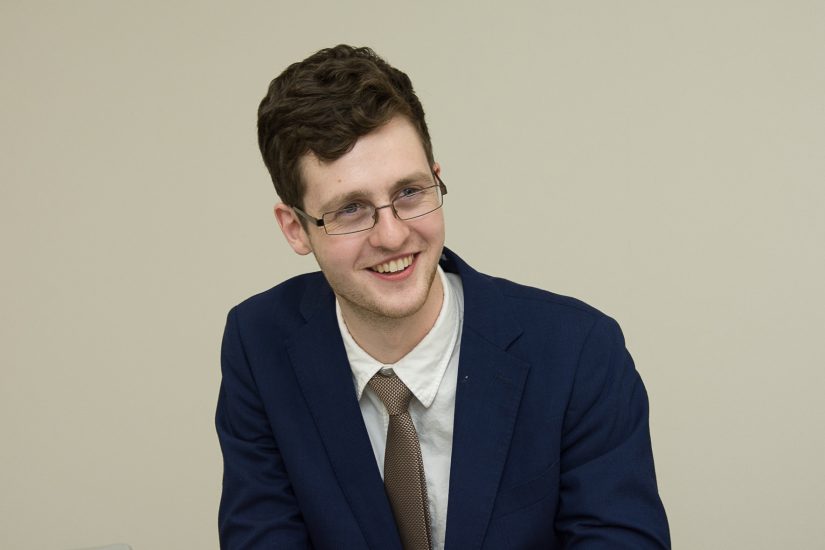 Japan is an Asian country far from the UK. Why did Isaac take an interest in Japan, and why did he choose Japan as the place to start his career as an engineer?
We asked Isaac about his engineering career and his life in Japan.

His initial motivation was Hong Kong action movies that he admired as “cool!”?

When I was a kid (about 13 years old), I had many friends from Hong Kong, and I often watched Hong Kong action movies. That’s how I started to think of Asian cultures and languages as “cool,” and in high school, I started studying Japanese by myself. Asian languages seemed difficult, so I wanted to challenge myself. I couldn’t decide between Japanese or Chinese and ended up choosing to study Japanese by the toss of a coin (laughs). After I started studying Japanese, I also started to watch Japanese anime. In 2017, immediately after graduating from a British university, I came to Japan, and started my job here.

Utilizing his expertise, AI technology, and enjoying work and Japan

AI is my area of expertise, and I’m currently participating in a project to develop customer-service robots for restaurants. I can’t get into the details, but it’s really interesting technology.

At my workplace, my Japanese coworkers told me that they wanted me to speak to them in English so they could study the language, so that’s what I’ve done, and their English has improved. I’m not seeing much progress with my Japanese, though… (laughs). I belong to a personnel service company that hires engineers from various countries, so it has a really good support system, and everyone at the office is very friendly, so I’m enjoying my job in Japan without any particular problems. Japan’s business rules feel a bit strict, but I don’t think that I would have been able to learn cultural customs such as bowing without having entered a Japanese company.

On weekdays, I go to the gym after work. On days off, I like going out to places like Shinjuku and going to game centers and restaurants. I love Japanese karaage (deep fried chicken), and I also like udon (thick wheat noodles). I also like the atmosphere of places such as Ikebukuro and Asakusa. Someday I’d like to visit Osaka, too.

I want to continue working as an engineer, a job where every day presents a new challenge. I really like Japan, but I might return to the UK someday. However, I haven’t decided if that will be five years from now, or ten years from now, or even later. If you go to the UK, please visit Greenwich Park in London. I used to live near there, and it’s a very beautiful place. Recently, I started studying Chinese, and there’s the possibility that I could go to another country other than the UK or Japan. If I refine my skills as an engineer, I think I can expand my career globally.

Jul 23, 2020—work
From Spain to Japan: Honing His IT Skills in the Land of His Dreams
Job For IT Engineer