Workplace Communication and Manners in Japan 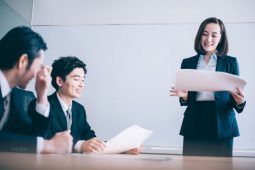 It turns out there’s a bit more to talking to people at work than one article can cover. I know, I wish there wasn’t, but since it’s things you might need to know, we might as well cover it.

Mind Your Manners! The Correct Etiquette for Japanese Job Interviews

If you have been offered a mensetsu (面接, interview) with a Japanese company, it is important that you prepare yourself in advance for the Japanese interview style. Interview etiquette is strictly regulated in Japan, with a set pattern of things you should and should not do. In this article, we offer tips for each stage […]

Business Etiquette: Being a Good Visitor

Working in Japan can require becoming part of a very particular society, with rules and customs that differ from Japan at large. For non-Japanese workers these are often less stringent, and many times we are shown some leniency for behavior that would be considered intolerably rude coming from our Japanese co-workers.

The Secret World of Meishi

Business cards, or 名刺 meishi in Japanese, are everywhere in Japan. Kids practice making them in school, people who don’t have jobs make cards to hand out their contact details to new acquaintances, and they mark an essential part of every business encounter. You will have business cards in Japan, whether supplied by your employer […]