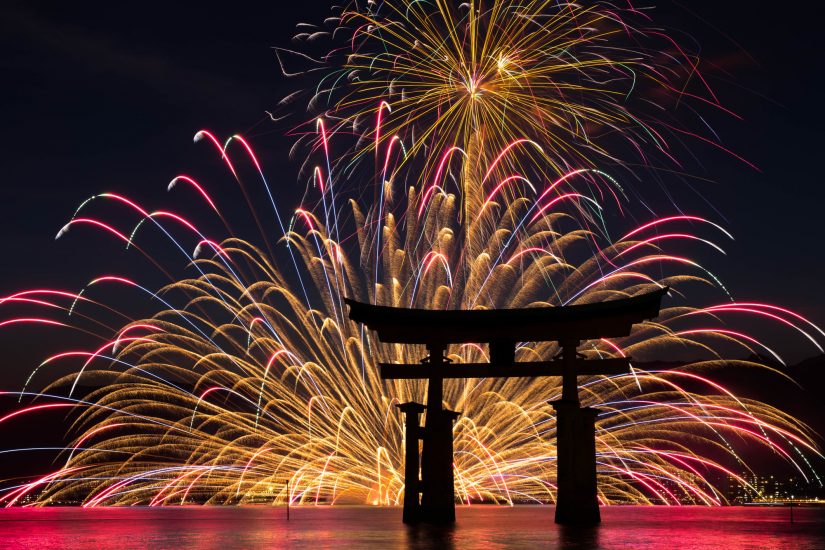 Fireworks are a major part of the Japanese summer season with hundreds of displays held all over the country throughout July and August. Local events have a festive atmosphere, with people dressing up for the occasion in colorful yukata (a kind of light summer kimono), and buying snacks and beverages from street-side stalls.

Fireworks are a major part of the Japanese summer season with hundreds of displays held all over the country throughout July and August. Local events have a festive atmosphere, with people dressing up for the occasion in colorful yukata (a kind of light summer kimono), and buying snacks and beverages from street-side stalls. The shows themselves are breathtaking and make for an unforgettable experience. Below we list our top recommended fireworks displays which are widely admired for their delicate artistry and technical brilliance.

The Sumida River Fireworks Display is the biggest display in Tokyo and dates back to 1733, making it the oldest public display in Japan. Today it is one of the most famous annual displays in Japan with around 20,000 fireworks launched and over a million people in regular attendance. The show is held near Asakusa at two venues located near the Sakura Bridge, and the Komagata Bridge. Usually held on the last Saturday of July, the fireworks begin at 7.00 pm and continue for around 90 minutes.

This is a dynamic fireworks display with over 10,000 fireworks launched to musical accompaniment. The biggest of Osaka’s summer displays, it began in 1989 as a celebration of hometown pride and is organized entirely by local volunteers. The show takes place on the banks of the Yodo River between the Yodogawa-Ohashi Bridge and the Shinyodogawa-Ohashi Bridge. Usually held on the second Saturday of August, the display starts around 7.40 and lasts for one hour.

This fireworks display takes place over the waters of Lake Suwa, in Nagano Prefecture. Half a million people descend on Suwa City every August 15th to see the launch of 42,000 fireworks. This is the largest number of fireworks launched at a single event in Japan! First held in 1949, the show features a competition between rival fireworks companies, and the use of the “star mine” launching technique for a continuous display of many fireworks in rapid succession. The show’s finale is the impressive “Niagara” technique which creates a 2 kilometer long curtain of light like a waterfall. The display starts at 7.00 pm and continues for two hours.

This display takes place every August by the island of Miyajima in Hiroshima Prefecture. Around 5,000 fireworks are launched over the sea with the famous floating torii gate of Itsukushima Shrine as a dramatic backdrop. Some of the fireworks are launched at the level of the water creating brilliant reflections. Extra tram services from the nearby city of Hiroshima and extra ferry services to the island transport 40,000 people each year to this event. To skip the crowded journey home, consider booking a night at a hotel on the island. Fireworks start at 7.30 pm and last for one hour. The display is held on differing dates from mid-to-late August, so check the official Miyajima website for current details:
www.miyajima.or.jp/english/

This spectacular display of fireworks over the ocean takes place in the port of Kobe in Hyogo Prefecture. The display was first held in 1971, and today over 300,000 people crowd the Kobe waterfront to watch over 10,000 fireworks launched over the sea. Cutting edge pyrotechnics paint the waves in vivid colors. Popular viewing locations are Meriken Park and Port Island. Other popular ways to view the fireworks are from a pleasure boat cruising in the bay or from a hotel room with a seafront view. The display is usually held on the 1st Saturday of August, with the show starting at 7.30 pm and continuing for one hour.

At this display in Shiga Prefecture 10,000 fireworks are launched from barges over Japan’s biggest lake. A rapid fire display of “star mine” shells provides a glorious light show which is mirrored in the lake waters. First held in 1984, this has become a very popular display for people in Kyoto, because the main location in Otsu City is only around 20 minutes from Kyoto by train. Altogether, around 350,000 people attend this show every year. The fireworks display at Lake Biwa is usually held sometime around August 6th to 8th, with the show starting at 7.30 pm and continuing for one hour.Impressed?

Check out Part 2 of this list for the very best displays of Japanese pyrotechnic skill!