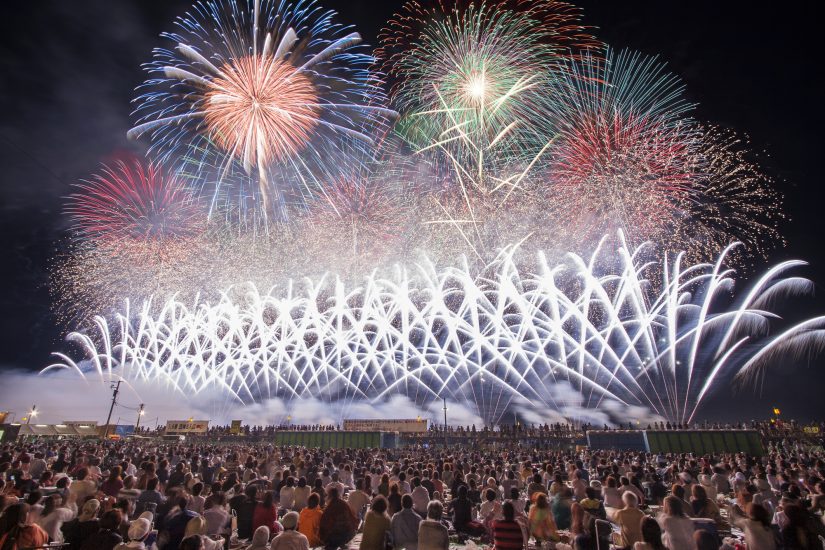 This seaside display is said to be over 300 years old, and is held as part of the local Obon Festival to commemorate the dead. This is Mie Prefecture’s biggest fireworks display with 10,000 fireworks, and it has a perfect beachside setting. Because the beach is naturally sloped, everybody can enjoy a perfect view. During the show two boats speed over the ocean in opposing circles while dropping self-explosive rockets in their wake. These rockets create a storm of colors over the sea. The display is held every year on August 17th at Shichiri-Mihama Beach which is just a short walk from Kumanoshi Station. The show starts shortly after 7.00 pm and lasts for two hours.

This fireworks display in Niigata Prefecture is the culmination of a three-day festival that is held on the banks of the Shinano River. The festival includes dances and parades before climaxing in two days of fireworks on the 2nd and 3rd of August. This show is considered one of the three best fireworks displays in Japan, the other two being the events at Tsuchiura and Omagari, which are listed below. Over 10,000 fireworks are launched each night, and notably they include a large number of Japan’s biggest fireworks which are called “shakudama”. These create massive explosions of color in a variety of shapes such as waterfalls and volcanos. A particularly famous segment of the show is the “Phoenix” display during which the fireworks are perfectly timed to accompany a popular song called “Jupiter”. The Nagaoka Fireworks Festival was first held in 1946 to commemorate those who died in the last war, and it is also dedicated to those who have died in natural disasters. For this reason the local citizens in Nagaoka have put their heart and soul into making this one of the best and most emotional displays in all of Japan. The show starts at 19.20 and continues until 21.10.

The Tsuchiura All Japan Fireworks Competition is held on the first Saturday in October from 18.00 to 20.30. Though this fireworks competition is held long past the peak summer fireworks season it is still listed as one of the three major fireworks displays in Japan. Held by the Sakura River in the old castle town of Tsuchiura in Ibaraki Prefecture, this event was first inaugurated by a local Buddhist priest in 1925. Today this display is a contest between pyrotechnicians from all over Japan, who compete to show off the latest high-tech firework capabilities and artistic effects. The competition is divided into three categories: rapid-fire star mines, size 10 shells (about 30cms across), and original displays. The Prime Minister’s Award is also given to the best overall competitor in all three categories. During the course of the competition a full 25,000 fireworks pattern the night sky with dazzling bursts of light and color. Both ticketed seating and free access areas are available. Tsuchiura can be reached via the JR Joban Line from Tokyo, and shuttle buses run between the station and the competition venue.

This fireworks competition in Akita Prefecture has been held since 1910 and is considered by many to be the best of the best. Similar to the contest at Tsuchiura, pyrotechnicians from all over Japan compete in three categories with the overall winner receiving the coveted Prime Minister’s Award. However, while the Tsuchiura competition is known for its specialists (particularly in the star mine category), the competitors at Omagari are renowned for their comprehensive technical skills and general creativity. Around 18,000 fireworks are launched during the show, with many displays set to music. Unusually, there is also a daytime fireworks competition using colored smoke. Held on the banks of the Omono River on the last Saturday in August, the daytime fireworks start at 5.15 pm and finish at 6.00. The nighttime fireworks start from 6.50 pm and finish by 9.30. Omagari can be accessed from Tokyo by the Akita Shinkansen. However, accommodation in Omagari is limited, so book early, or stay in towns nearby.