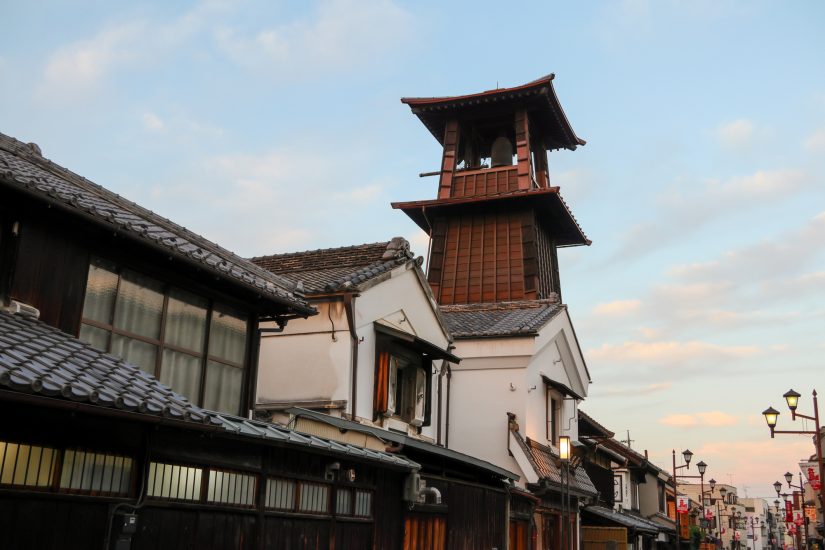 While Edo Wonderland theme park in Nikko in Tochigi Prefecture is a replica of an Edo-era town, the city of Kawagoe in Saitama has the real thing! In Kawagoe, which can be reached from Tokyo via the Tobu Tōjō Line from Ikebukuro or via the Seibu-Shinjuku Line from Shinjuku, there is an old commercial district nicknamed “Ko-Edo” (Little Edo)

While Edo Wonderland theme park in Nikko in Tochigi Prefecture is a replica of an Edo-era town, the city of Kawagoe in Saitama has the real thing! In Kawagoe, which can be reached from Tokyo via the Tobu Tōjō Line from Ikebukuro or via the Seibu-Shinjuku Line from Shinjuku, there is an old commercial district nicknamed “Ko-Edo” (Little Edo) after its giant cousin about 20km to the south where most of the buildings are converted warehouses from the Edo period.

The district also has a famous landmark called “Toki no Kane”, an Edo-era bell tower which stands among and above the dark timber buildings in a pedestrianized section just off the main road. The principal thoroughfare in Ko-Edo is a busy street full of souvenir shops, cafés and restaurants. Farmers around Kawagoe grow Murasaki sweet potatoes and most of the shops and cafés in Little Edo make good use of this product to offer a wide variety of sweet and savory snacks made from this purple tuber.

Other local products on offer include various craft beers and ales from Kawagoe’s COEDO brewery and Japanese people often visit Kawagoe for the express purpose of eating in one of the restaurants which serve the popular braised unagi eel on rice. Some of these restaurants date back 200 years with the eels being taken from rivers in the local area and served up in a sweet soy braising sauce.

The town of Kawagoe emerged largely unscathed from the 1923 Great Kanto Earthquake and World War II, though many of the farmhouses in the surrounding countryside were destroyed. For this reason, Kawagoe’s Kitain Temple, which has a 1,200 year-history, houses the only surviving buildings from Edo Castle, moved there on the orders of the third Tokugawa shogun, Iemitsu, in 1638. It also contains the Semba Toshogu Shrine, one of the three most important Toshogu shrines in Japan and other important historical remains. Although you can enjoy a visit to Kitain Temple anytime of the year, April/May is a particularly pleasant period because the temple grounds contain a beautiful garden, with many cherry-blossom trees and a large pagoda.

Also, if you happen to be strolling around the town at the right time, you might come across small localized traditions which take place in the months before or after the well-known Kawagoe Festival. You could, for example, chance upon performers of the Shishi-mai or “Lion-dance” with the costumed performer dancing in a small float, perhaps in a quiet street away from the busy shopping area.

Designated a UNESCO intangible cultural heritage, Kawagoe Festival’s giant floats are its major highlight. This festival is held over two days every October and reproduces a style of festival popular during the Edo period, with its many spectacular floats pulled around the historical heart of the city.

There are 10 neighborhoods in Ko-Edo that come together to continue the traditions, including master craftsmen responsible for preserving and maintaining the large and intricately decorated festival floats known as dashi. The dashi are two stories high on three or four wheeled bases, decorated with gold leaf and painted in red and black lacquer. Although they look similar from a distance, there are subtle differences in each float’s decorations, probably due to the fact that each neighborhood is responsible for its own float.

During the festival, the floats meet at a wide intersection surrounded by throngs of people from near and far. There, they turn to face each other while the orchestra, consisting of flute, drum, handbell players and dancers inside the floats, compete for several minutes cheered on by the crowd, many of whom are carrying paper lanterns. This festival is one of the most famous in Kanto and well worth going to see.

Another curiosity of visiting Kawagoe is a dog called Priya that’s said to have magical, healing powers. This dog was around in 2016 at least, so if it’s still alive you might want to visit its eccentric owner’s shop where he also displays giant Asian hornets in jars and sells honey from his beehives. The giant Asian hornet is a constant hazard to Japanese beekeepers because they can massacre an entire hive of European honeybees in just a few hours, so perhaps that’s the reason he displays them. If stung, perhaps you can call on the services of his magical healing dog….