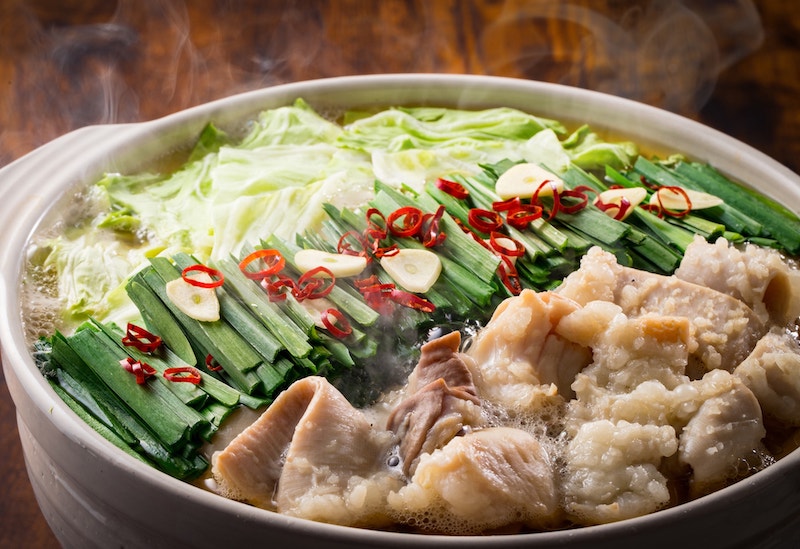 Have you ever tried motsu-nabe (lit. ’organ pot’)? It’s a bit of a Japanese favourite. I think it’s surprisingly little-known outside Japan, so I’m going to introduce it today.

Motsu-nabe is actually a good dish for both the health and performance of a busy engineer.

Nabe dishes are a classic of Japanese winters. It’s the first thing many Japanese people think of eating when it starts to get cold.

’Nabe dish’ is a bit of a broad stroke, and there are actually many types. Sukiyaki is probably the most popular. Shabu-shabu, oden, chige-nabe, yose-nabe, kamo-nabe, mizutaki, chanko-nabe and so on are some other examples; there’s no end to them.

When I was a university student, I was working part-time in a sukiyaki restaurant in Ginza, and saw many foreign customers there.

Now, I’d like to introduce some of the appeals of motsu-nabe.

Motsu-nabe is a nabe dish using ’motsu’ (organs such as the small and large intestines) from cows and pigs, sometimes called hormone-nabe.

It began in Fukuoka prefecture, and is now eaten around Japan. Other ingredients include garlic, cabbage, Chinese chives, chilli pepper, and tofu. Flavouring is done with salt, pepper, soy sauce, miso and so on.

It’s an organ-based dish, which might turn some away, but it’s good enough to be worth a try!

Why Motsu-nabe is popular in Japan

Motsu-nabe is delicious, of course, but it’s also said to be good for your health. This is why I singled it out as a good food for engineers.

For one, it’s heavy in amino acids and collagen, which will take good care of your skin.

Apart from that, Chinese chives being good for your immune system and against fatigue, garlic is said to be an incredible health food, with many good effects on beauty, fatigue recovery, blood flow, gastrointestinal health, and more.

Engineers in particular, regardless of gender, tend to move less than in other jobs, while also being in a potentially stressful environment. Their meals can be unhealthy as well. That’s why motsu-nabe, with its many effects on your health, is perfect for engineers.

And now, I’m going to introduce a place where you can enjoy motsu-nabe.

There are many restaurants famous for it in Tokyo, but the one I went to is a place called Arizuki. It’s quite popular, so you’ll need a reservation, but the taste is worth it.

This shop has white motsu-nabe (flavoured with white miso), red (soy sauce), silver (salt and black sesame), gold (kelp), fire (stronger chili pepper), and other variations, so you’ll be able to have it just how you like it.

The silver one I had was a simple, clean flavour with a dash of black sesame, which matched both the meat and the vegetables very well. I recommend it to anyone having this for the first time.

Ordering nabe starts from two people worth of food, but if you come during lunch hours you can order for one; be sure to try it if you’re ever in Tokyo.

The Arizuki in Shibuya in particular is on a high floor in the recently built Shibuya Scramble Square building, which gives an excellent view of the city (if, for example, you’re visiting with a loved one).

By the way, Shibuya used to be known as ’Bit Valley’, a hotspot for new IT businesses. There are still some big IT corporations in Shibuya, but the amount of startups is growing as well.

This time, I talked about nabe dishes, an important part of getting through Japan’s cold winters that isn’t much known outside Japan. I think its help with both health and performance can be very handy, and I hope it helps with your work in Japan as an engineer.

See you next time! 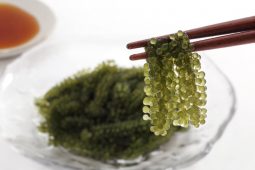 Jan 15, 2020—culture
Seaweed, the superfood of Japan
Job For IT Engineer