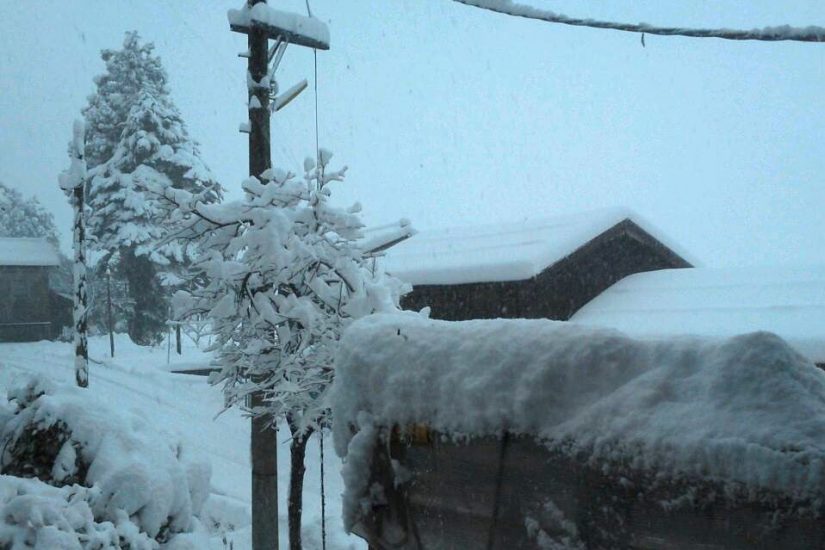 Climate, Japan, and You: How to survive the weather

It might not be the most exciting thing about Japan, but it could easily save your trip here, let alone any plans of a long-term stay. This article goes out to all my friends and family who visited here and complained about the weather the entire time

It might not be the most exciting thing about Japan, but it could easily save your trip here, let alone any plans of a long-term stay. This article goes out to all my friends and family who visited here and complained about the weather the entire time, and to a lesser degree, friends abroad who have no idea what I’m talking about when I mention monsoon season. No wonder, really; there are many exciting things to hear about Japan, and weather would never make any list, but it pays to be prepared.

I should start this by saying that none of my advice here will be as completely reliable as I would like. The weather isn’t as stable as it used to be (and in many places it wasn’t that steady to begin with), but this should be enough to save you from any serious troubles, or needing to pack an entirely separate set of clothes to wear indoors.

The first thing to keep in mind about Japan is its shape: Being more or less banana-shaped, it stretches quite a bit from north to south for a country of its size (those of you in larger countries, please try not to laugh too loudly). This means there’s a lot of variance across the country, and no one-size-fits-all solution that will handle all of Japan, in case you plan on traveling all around the country.

There’s one thing that almost never changes, though: Water. In the countryside, this means beautiful streams and rivers everywhere, and lush greenery of the kind you don’t really see outside of what’s practically a rainforest. That side of it is beautiful, and I wouldn’t trade it for anything. You probably guessed the other side by now, though; rain, snow, more rain, and unbelievable humidity. While it’s more or less a constant across the country, it does at least get drier the further north you go, as a rule of thumb.

At its driest, most places in Japan drop to 50% humidity or so; exactly what part of the year that happens in varies by the place, but for those of you interested in the Tokyo area, it’s usually in winter. Throughout the rest of the year, it takes many different shapes. In spring, you can expect rain or outright tropical storms (more or less the same as typhoons; they only avoid the name by technicality). In summer, we have monsoon; this is something that only someone living here or in southeast Asia (or occasionally, Florida) is going to fully understand, but for everyone else…

Several years ago, several relatives came to visit me from Israel for part of the summer. Israel being a desert, at first, they were all very excited to see rain in summer (and then confused when it lasted more than fifteen minutes). An hour later, when it was starting to get in the way of our plans, they suggested we can wait for it to stop. How long can rain go on for, anyway? An hour and a half?

The rain did stop, but by then it was six days later. The novelty wore off a bit, by then.

For the remainder of summer, most days will feel like you’re walking through a wall of warm soup, and humidity rarely dips below 90%. Autumn is a lot like spring, and winter will meet you with a lot of snow, rain or hail depending on where you live (although in the Tokyo area, it’s a rare dry spell with clear skies a lot of the time).

This means that the hot and cold patches of weather, which already swing back and forth a lot in Japan, will feel much more intense. The good news is that Japan has a few tricks up its sleeve to help! In summer, it’s almost harder not to end up with a complimentary uchiwa in your hands: A fan made of paper (usually with some sort of advertisement these days) stretched over a plastic frame. It might not look like much, but flapping it at your face as you walk around is a lifesaver during summer.

In winter, every convenience store (believe me, whatever number of them you’re imagining, there are more) carries pocket kairo, or a ‘pocket hearth’, a small bag that heats up when opened and stays warm for hours. Or if you prefer, you can usually get them as plasters as well. Between the two and the right clothes, you should be set most of the time; just remember that it swings a great deal in temperature between day and night, and you should be just fine, so long as you remember to drink often.

Personally, my solution is often to stay inside, but this article is aimed at anyone who’s traveling and/or less of a coward than the author.

One more thing to watch out for: Japanese air-conditioning. It tends to switch from hot to cold depending on calendar date and nothing else in shops and so on, meaning it might be a bit out of place for the actual weather outside. More to the point, they trend towards overdoing it a bit (18C or 30-odd, and no ventilation either way, just a change in temperature). I suggest carrying an extra layer that you can take off and put on easily if you’re going to be in and out a lot; it can be like going back and forth between two sharply different climates.

Anything focusing on how to prepare for the worst of the climate is going to end up sounding a bit negative, and I’d rather not give the wrong idea about Japan, so let’s end on a high note. The payoff to this climate is a large part of why nature in Japan is as beautiful as it is. Outside of major cities (and even cities are greener than their counterparts in most countries I’ve been to), there’s a level of lushness through spring and summer that I’ve never found elsewhere, which I’m looking forward to showing you in future articles.

Just as soon as winter ends, greenery covers everything, and you can count on at least one, often any two of plum, cherry and peach blossoms flooding the air and streets with petals. Once summer comes, every street sports dozens of hydrangeas. Far from stopping or even slowing down, autumn just swaps out the old plants for a new lineup of delicious mountain vegetables under all the leaves; every year, I get about three meals a week just from an afternoon of collecting anything that catches my eyes in the mountain (even if that’s more of a country option). Come winter, the north of Japan is one of the few places I know of that can get massive snowfall without any of the cold to match. Here in Itoigawa City, the temperature very rarely even drops as far as freezing; the snow is constantly melting, but there’s so much falling that it adds up anyway, reaching as much as 3~4 metres (or if you prefer, 10 to 13 feet) while keeping warmer than some parts of Tokyo.

Actually, maybe that’s a little too much snow, but you have to admit, it’s very pretty.

Like everything else in Japan, the weather takes a bit of preparation and getting used to. It pays off, though, and the Japan we like to see here wouldn’t be here without it. Now that you know, come prepared and you’ll be ready to enjoy everything it has to offer!