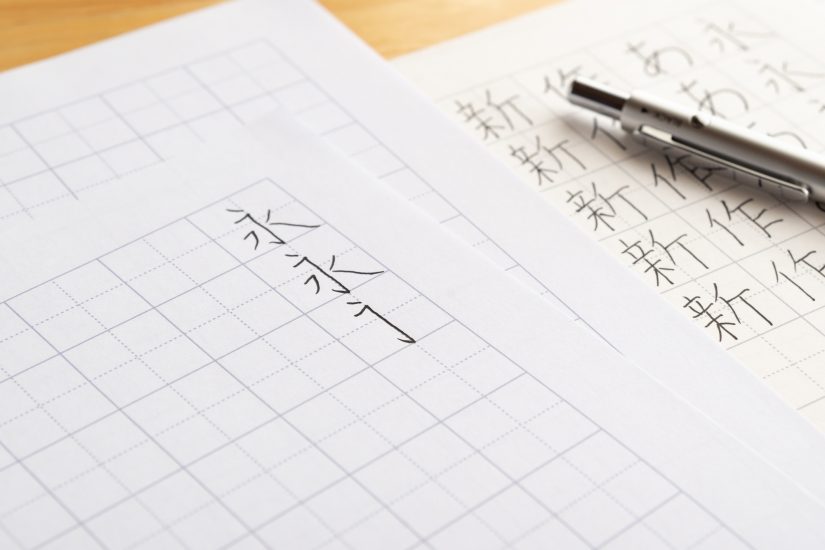 The history and purpose of the Japanese writing system
6月 24, 2019—study

As you can see hiragana has a more cursive appearance, and katakana is more angular. Both hiragana and katakana have 46 basic characters. The first five characters listed above express the five vowels. After that each kana combines a consonant with a vowel as shown below.

The exception to the consonant + vowel rule is the syllable n which is written ん in hiragana, andン in katakana.

Although, hiragana and katakana are used to write the same sounds, they are used in different ways. Hiragana are mostly used for particles and other grammatical elements such as the endings for verbs, adjectives, and adverbs. They can also be used to write some words when the kanji is too difficult, or obscure to write. Katakana tend to be used for foreign words and names, technical terms, and onomatopoeia.

Sometimes hiragana is written beside or above a kanji to show how it is pronounced. When hiragana is used this way it is called furigana. Furigana is very common in children’s books or in textbooks for non-native readers.

Kanji convey meaning rather than pronunciation. They are mostly used to write nouns, and the stems for verbs, adjectives, and adverbs. Here are some simple kanji to show you what they look like.

Or they can be used in combination with hiragana to produce verbs, adjectives, and adverbs:
食べる (taberu) = to eat
速い (hayai) = fast
速く (hayaku) = quickly

The History of Japanese Writing

To understand why Japanese uses both kanji and kana, it helps to know a little bit about this system’s history. Prior to the 5th century, Japanese had no writing system to express the written language. This changed with the introduction of kanji from China. At first Japanese read and wrote only in Chinese, but then they started trying to use Chinese characters to write Japanese. However, Chinese and Japanese are very different languages with very different grammatical systems. In order to write certain grammatical function words, inflections, and particles, the Japanese had to use some kanji just for their pronunciation rather than their meaning.

In the 9th century hiragana and katakana developed as simplifications of the original Chinese characters. Hiragana developed as a more casual alternative to kanji, and was used mostly by women to write informal materials such as letters, diaries, poems, and stories. Katakana was developed by Buddhist monks as a simplified phonetic script which they used to annotate religious texts written in Chinese. Over time hiragana came to fill the grammatical functions that kanji couldn’t express, and katakana came to be used primarily for foreign words.

To study the Japanese writing system you should first learn hiragana and katakana. This should not take too long. When you have mastered these you are ready to study kanji. This will take longer. There are said to be over 50,000 kanji in total. Fortunately you don’t need to learn all of these! There is an official list of 2,136 jōyō (general use) kanji that children are taught in school, and these should be your prime focus. Although there are some study systems that claim you can learn the jōyō kanji in just a couple of months, such claims should not be taken too seriously. To learn to read kanji properly requires patience, dedication, and a steady study habit over the long term. It will depend on your own study habits exactly how long it takes, but two years is not an unreasonable length of time to spend learning to read Japanese.