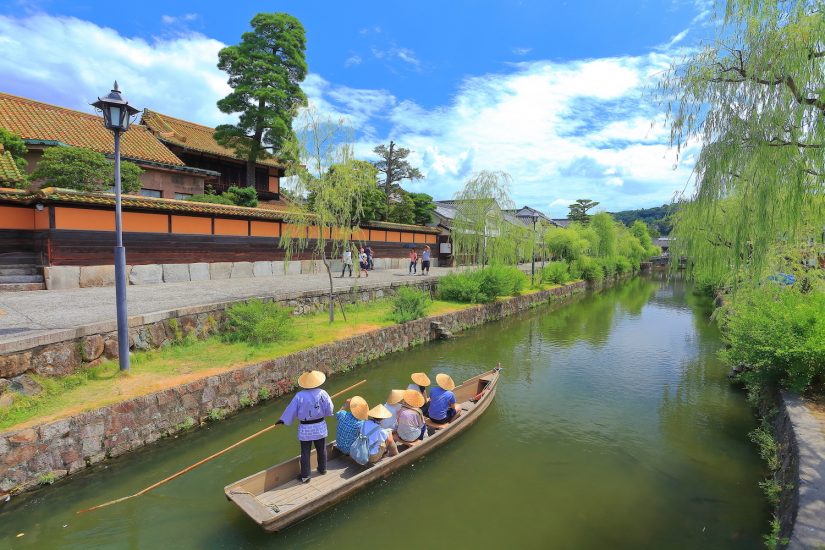 Okayama: Gateway to Chugoku and Shikoku

Okayama is often overshadowed by its much more famous neighbor, Hiroshima, but it has plenty to offer in its own right. In addition to hosting the second largest city in the Chugoku region, Okayama City, it also serves as a primary transport hub connecting the Sanyo Shinkansen line with rail lines going to Shikoku.

Okayama is often overshadowed by its much more famous neighbor, Hiroshima, but it has plenty to offer in its own right. In addition to hosting the second largest city in the Chugoku region, Okayama City, it also serves as a primary transport hub connecting the Sanyo Shinkansen line with rail lines going to Shikoku. Of course, like the other prefectures making up the Chugoku region, much of the best of Okayama lies in its natural environment, as well.

Treasures of Mountain and Sea

The natural scenery of Okayama makes the very best of the mountains and sea, with mountain streams creating stunning waterfalls to flow into the Seto’s calm waters, spotted with island attractions.

The Makidani river meanders through the mountains from Soja to Kibichuo, and in the Gokei gorge it has created a short but stunning stretch of cliffs unusual rock formations buried in exquisite forest scenery. It’s only accessible by car, but the calm forest atmosphere is surely something worth the trip.

The Caves of Niimi

The small town of Niimi is home to three special limestone caves.

Maki-do, nicknamed “Dream Palace”, has a small lake 450 meters in, and is lit up with multicolored lights to create a kind of „cave museum“ showcasing the various rock types.

Ikura-do cave is much larger, and is something akin to a labyrinth. It opens 240 meters up on a cliff face, and stretches for over a kilometer into the mountain. The ceilings stretch up to 90 meters, and there is even a 50-meter waterfall found inside.

The final cave is not actually a cave anymore. At Rashomon, a cave collapsed long ago leaving behind only a string of limestone arches and semi-enclosed tunnels in the forest. You can walk through the massive arches now and imagine the way this enormous limestone cave might have looked millions of years ago.

The islands off Okayama are not highly populated, and do not have a strong tourist infrastructure. That alone can often be appealing, as it’s possible to enjoy a taste of Japan that is simply not found in cities and towns. Kitagi island does have a bike trail, and bicycle rentals near the ferry port, so it’s perfect to take some time away from bustling mainland life and wander through a quiet, rural Japanese island. The trail takes riders around the island to see the pristine forests, the granite carvings and quarry that birthed the rocks, and beaches that are often totally deserted.

Kurashiki is probably Okayama’s most famous sight, but there is good reason for that.It concentrates centuries of history in its meticulously preserved old-town, the Bikan Historical Quarter, as well as holding Japan’s oldest western art museum, and a view of the Great Seto Bridge leading to Shikoku. If you only have one day in Okayama, make sure you spend it here.

While the castle in Okayama city is a fine replica of the original, the truly important site in the city is Korakuen, one of Japan’s three great traditional gardens. Covering about 130,000 square meters, it offers a look at the scenery that dates back to the Edo period.

Another historical site is Kibitsu Shrine, a certified National Treasure and example of unique shrine architecture known as “Kibitsu-zukuri” style. But what’s most interesting about it is the legend of the Ura demon, whose head is buried under the shrine and offers predictions of the future to shrine supplicants.

This castle atop a mountain in Takahashi city is also called the “Castle in the Sky.” The mists that form around the mountain create the illusion that it floats in mid-air, a sight that can best be seen from the nearby Bicchu Matsuyama Castle Observatory. The castle itself features a well-preserved tower and turret, and offers beautiful views of the surrounding countryside.

The Momotaro folktale, about a little boy who sprang from a giant peach and went on to defeat the ogres plaguing his village, is based in Okayama and is celebrated here at the city’s summer festival, and in the more reserved autumn festival. The summer festival features dance shows, fireworks, and other common summer activities. while the autumn version focuses on traditional musical performances, fantastical reenactments of Momotaro’s feats, and more. Performers from villages across Okayama gather for the autumn festival, offering a deep taste of local culture.