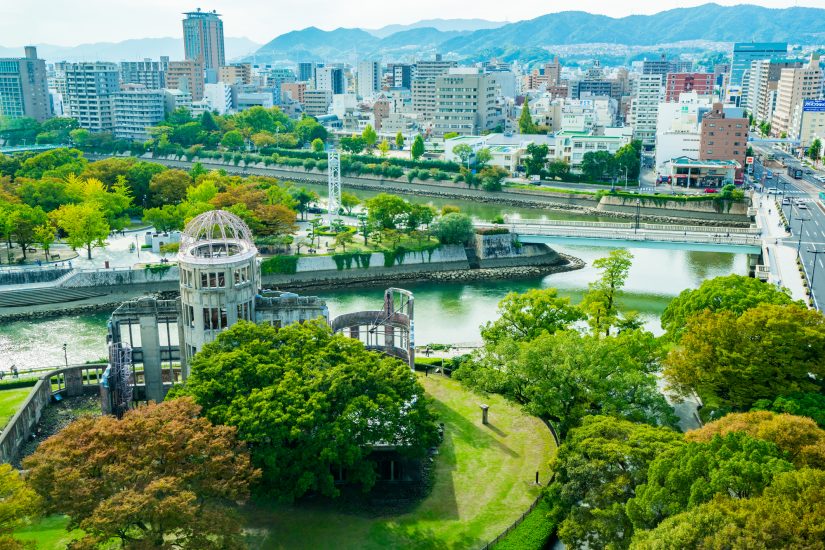 How to visit Hiroshima in 2 days

First and foremost, it is expected you should head to the Peace Memorial, pay your respect and meditate on those events. It might not sound like the most enjoyable way to spend a weekend away, but it is more than a moral duty as it will turn out to be a very instructive and satisfying experience. The park itself with its numerous little memorials offers a serene atmosphere.

When strolling through the park, it is almost hard to imagine this entire place used to be completely inhabited with homes and thousands of people going about their business that infamous day. Right next to the park stands the iconic Atomic Bomb Dome, formerly an exhibition hall, that was preserved the way it was left right after the bombing.

As to the Peace Museum, it will most likely occupy a lot of your time as it is so informative from a scientific, historical and human perspective. Each exhibit is just fascinating and gives you much more than you would expect.

The exhibition on the ground floor is without any doubt the most difficult to go through as are exposed personal effects such as clothing or even the tricycle of a little boy victim of the bomb that was buried in the family garden until they decided to donate it to the museum. An other section that is not to be skipped are the written testimonials of family members telling the heartbreaking stories of their last interaction with their loved ones that fatal morning.

Considering this first visit will take much of your first day, you can then take it easy and head to Hiroshima castle. Besides enjoying the traditional architecture of any Japanese castle, the exhibit provides some costumes you are welcome to try on for some fun shots. Go for it if you wonder what it feels like to look like a real samurai.

You can start your second day by visiting a typical and soothing Japanese garden. Shukkei-en, which was created in the early 17th century, is the oldest the city and was designed by Ueda Souko, a warlord who famously founded his own school of tea ceremony. Like any Japanese garden wandering around Shukkei-en will leave you with a peaceful state of mind.

After making it through the first day, you can head for a well-deserved “nature retreat” on the island of Itsukushima, also more commonly known as Miyajima. The “Shrine Island” is of course well-known for its friendly ginger deers and naturally its iconic Shinto shrine overlooking the sea with its gates firmly planted into the water. When the tide is low, you can even walk towards them and take some pictures for life lasting memories. But the first part of the island is not the only charming place. You can hike or take the ropeway to the summit of Mt Misen and admire the spectacular view over Hiroshima Bay, and if you are lucky enough to get a clear weather, you could also take a peek at Shikoku. One thing to bear in mind while climbing up or down the mountain is the presence of viper snakes in some parts of the mountain. Stomping your feet along the way should be enough to keep them away. Also, the ropeway will make a stop a little before the summit which means you will need to hike for about 30 minutes to get to the top, but don’t worry this section is wild-animals free. Finally, I suggest staying overnight to enjoy a quiet evening on the island after the horde of tourists coming to watch the sunset has left.

Let’s play it like the Japanese who never neglect to enjoy the local specialties and enjoy what Hiroshima is famous for.

You can indulge yourself with the famous oysters. If you are not keen on raw oysters, you can also have them fried and they will be as delicious. The fish anago is also a local delicacy. You might be more familiar with its more famous and fancier cousin the unagi. Hiroshima-yaki is a sort of big salty pancake with among other ingredients noodles and extra cabbage compared to its Osakan cousin, the okonomi-yaki. For dessert, we will end with the delectable momiji-manju which is a sort of small cake in the shape of a Japanese maple leaf. Itadakimasu!

Jun 24, 2019—travel
Shikoku – A Natural Wonderland
Job For IT Engineer