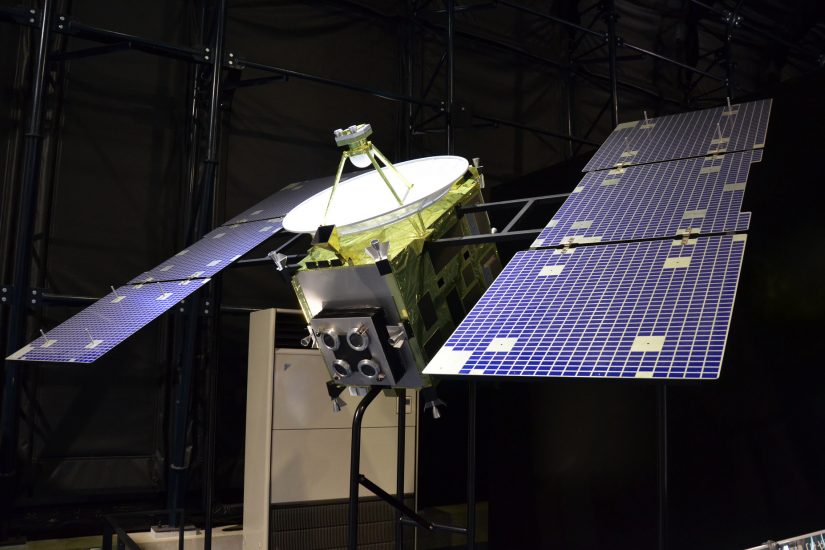 Japan’s space program is led by the Japan Aerospace Exploration Agency (JAXA) and for some reason there is a video message on their website from Brian May, the guitarist of world-famous rock band Queen.

Japan’s space program is led by the Japan Aerospace Exploration Agency (JAXA) and for some reason there is a video message on their website from Brian May, the guitarist of world-famous rock band Queen. Truth be told, Brian May has a PhD in astrophysics, so he has a deep knowledge of space matters.

In his message Brian praises the success of Jaxa’s space probe Hayabusa2 in making a second perfect touchdown on the asteroid Ryugu. The goal is for Hayabusa2 to bring rock samples from Ryugu bck to Earth, and because of the second successful touchdown, expectations for the samples’ return have risen sharply.

Prior to Hayabusa2, the first space probe to succeed in return samples from an asteroid was HAYABUSA (MUSES-C). The fact that Hayabusa2’s current mission is proceeding so well, can be ascribed to knowledge gained from investigating the causes of various failures that occurred during the mission of HAYABUSA, and this is reflected in the planning for Hayabusa2.

The Successive Troubles of HAYABUSA

HAYABUSA was launched in May 2003 and arrived at the asteroid ITOKAWA in September 2005. Rock samples collected from ITOKAWA were placed in a capsule which reentered our atmosphere in June 2010. When the capsule was recovered safely from Australia, the HAYABUSA project was complete.

HAYABUSA’s mission was not only to return samples from an asteroid. The divergent objectives for the mission extended from the obvious goal of surveying the surface of the asteroid, to demonstrating the propulsive power of its ion engines, verifying the gravity-assisted acceleration achieved by using those ion engines in unison with a swing-by of Earth, approaching and landing on an asteroid with optically assisted autonomous navigation, reentering the atmosphere, and recovering the capsule.

Although HAYABUSA did eventually succeed in returning samples, the project faced a series of problems. A solar flare damaged its solar panels, decreasing their generative abilities and causing a decrease in the propulsive power of the ion engines. Furthermore, a reaction wheel necessary for attitude control broke down, there was a fuel leak, lithium-ion batteries deteriorated, and the loss of attitude control caused an interruption in communications that lasted several weeks.

Although the return to Earth presented a major challenge, the project’s researchers and technicians pooled their creative resources brilliantly to bring ITOKAWA’s samples back home to Earth. Those experiences have been put to good use in the Hayabusa2 project, and no doubt will prove useful for future space probes.

Incidentally, the name HAYABUSA is taken from the Japanese name for the peregrine falcon, a raptor that flies at a speed of 300km/h. While the asteroid ITOKAWA is named after Itokawa Hideo who was known as the father of Japanese rocket development.

Leveraging the Experience of HAYABUSA with Hayabusa2

So far Hayabusa2 has not had any major problems like those that plagued HAYABUSA. The reaction  wheel and ion engines are both functioning very well. However, this does not mean that HAYABUSA was of low quality and Hayabusa2 is high quality. It is the very experience gained from HAYABUSA as an experimental craft that has made possible the greater reliability of Hayabusa2.

Currently, Hayabusa2 is maintaining its rendezvous with Rygu while performing various observations. Three touchdowns were planned, but as the collection of samples seems to have been assured in two touchdowns, a third time is now unnecessary.

Hayabusa2 will commence its journey home around the end of 2019, and is scheduled to return to Earth at the end of 2020. Hayabusa2’s current status can be checked on the JAXA website. Let us hope for the space probe’s safe journey home and the successful return of those samples.

I would like to introduce one more of JAXA’s spacecraft that is currently active in space. That is the unmanned space station supply craft KOUNOTORI (H-II Transfer Vehicle: HTV).

KOUNOTORI is loaded with such supplies as food, clothing, and experimental equipment, then launched with a rocket, before approaching and docking with the International Space Station (ISS). Conversely, it is loaded up with unnecessary waste matter, before detaching from ISS, and reentering the atmosphere where it burns up and its function is finished. Now that the USA has ceased operating the Space Shuttle, it could be said that KOUNOTORI is vital for the supply of ISS.

The Japanese word Kounotori corresponds to the English word “stork”. The name is appropriate as KOUNOTORI conveys important things, just as a stork is said to deliver a baby.

Sep 5, 2019—work
Work in Japan: Alya from Malaysia, who dreams of becoming a system consultant
Job For IT Engineer