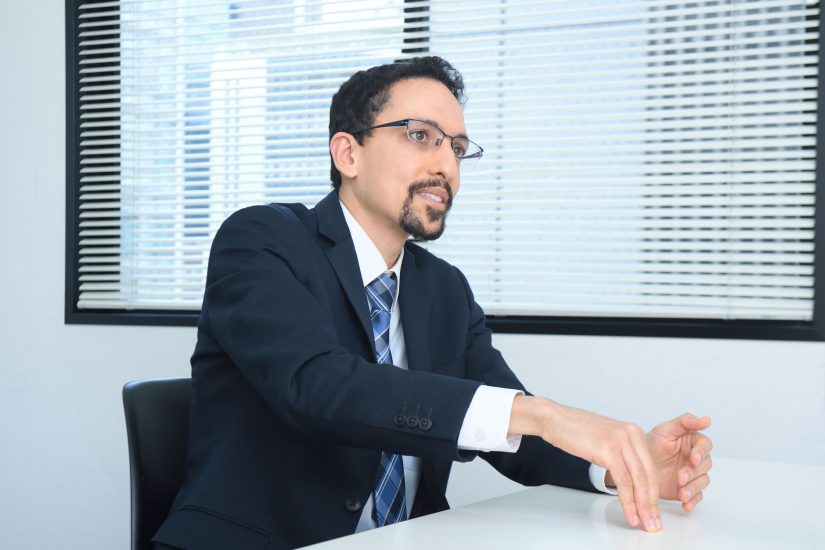 After graduating with a major in network engineering, joined a major Japanese manufacturer in Brazil. At that time, Henrique’s specialty was voice processing technology, which I got interested in through my colleagues and learned by myself.

I believe that continuous self-improvement and challenging yourself is important, also which is on the other side of the globe, and the days of challenges in Japan.

He learned Japanese by himself and tried to improve my network engineering skills during my time while working still in Brazil.

Born and raised in Brazil, where there are many Japanese companies, I have been exposed to Japanese culture. Also, through my Japanese-American friends and became familiar with Japan through anime, manga, dramas, and music. I started studying Japanese when I became a junior high school student, and by the time I was in college, I had improved to a level where I could have simple conversations.

However, when I worked at a Japanese company, I could not make use of my Japanese skills as I had not have many tasks where Japanese communication was needed. So meanwhile, I went on learning d. I continued to train in Japanese through Japanese music, dramas, anime, and talking with Japanese via Skype.

Two years later, I transferred to a major Brazilian IT company, where I worked for about five years and gained experience in a number of infrastructure-related projects. Here, I was entrusted with voice-related work to develop my knowledge in voice processing technology, and also I obtained certifications for voice network technology such as CCNP Voice and UCCX 500–051.

But I wanted more, I wanted to get out of my comfort zone.

Unfortunately I didn’t get the chance to visit Japanuntil my honeymoon.

I’ve been to various countries such as China, Singapore, Spain, and Argentina, but I’ve never been to Japan. I felt that since I learnt Japanese I need to go and see the country. When I got married, I decided to travel to Japan with my wife. And of all the countries I went to, Japan was the best! In Japan, we made the most of our 20-days-long trip, just to mention a few, we visited Tokyo, Kamakura, Nara, Kyoto, Osaka, Kurashiki, Omichi, Hiroshima, Miyajima,

I loved it and it just made me more interested in the country!

Soon after I saw a job offer by Human Resocia GIT program, on a global recruitment site.

After arriving in Japan in October 2018, I was dispatched to a major telecommunications-related company as a GIT engineer and I was working as a voice network engineer. Now I am involved in some migration projects.

In the project I was in charge of, I tried to exchange information with my seniors, such as how to do this based on my own experience and knowledge. I tried to decide the methodology while continuous consultation and being advised. This is a very rewarding experience because my colleague treats me equally, despite the language gap and the gap in terms of experience.

Even though I had some experience working in Japanese corporation, I still had some surprises when I started working in a fully Japanese working environment. One was that Japanese people concentrate on their work without making jokes during working hours.It was unthinkable in Brazil, but I think that with this light way of conversation, you will get to know each other better and it will be easier for you to consult on the job. And often good ideas come from chats, it may be better for Japan to adopt a Brazilian way of working. I can say that working at a Japanese company is challenging, but for sure a good experience.

The best thing I’ve learned during my experience so far working in Japan is the know-how to prevent rework and mistakes. A common way is to carefully examine the materials, plan the design phase after taking time to implement it, and include engineers other than those directly involved in the task to help with checking and testing. I think I have learnt a lot.

However, it seems that the so-called “regular meeting”, in which exchanges are exchanged for a long time in Japanese, was a big challenge.

Another interesting thing is that meetings can be quite long, and for me it’s hard to concentrate for a long time because of Japanese, so after a while it’s a bit difficult to catch all the important information.

AlthoughI couldn’t travel to Japan when I was a student, I am glad that my dream came through and I could settle here with my family. It’s a good thing to work on the other side of the word, especially as part of a program like GIT, where I can meet people from various countries!

*Article is written based on an interview in December 2020.

Jul 23, 2020—work
From Spain to Japan: Honing His IT Skills in the Land of His Dreams

Jan 25, 2021—work
Working for a Japanese IT company – Interview
Job For IT Engineer