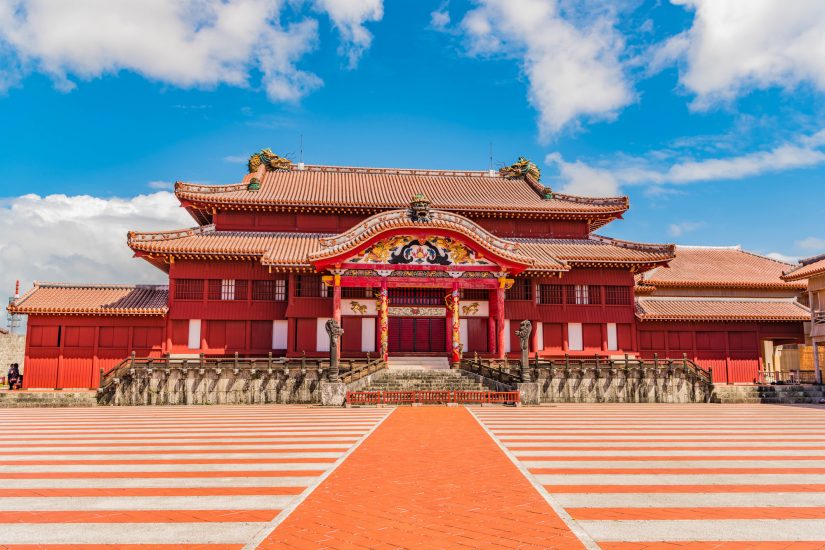 Shurijo Castle a Ryukyuan gusuku castle located in Shuri, Okinawa
(before it has burned down)
8月 6, 2019—culture

For 450 years, the island of Okinawa and all the islands in that archipelago were under the rule of the Ryukyu Kingdom until they were occupied and incorporated into the Empire of Japan in 1879.

For 450 years, the island of Okinawa and all the islands in that archipelago were under the rule of the Ryukyu Kingdom until they were occupied and incorporated into the Empire of Japan in 1879. That’s the reason why there is never much mention of Okinawa Prefecture (as it’s now called) in books about Japanese history or culture, except when it’s to do with the Second World War.

Although Japanese is the official and most widely spoken language on Okinawa these days, when I paid my first ever visit there about two years ago, I thought it would make the trip more interesting if I learned a few words in the Okinawan language beforehand. I’m not talking about the Okinawan dialect of Japanese, but about the collection of Ryukyuan dialects which are called “Okinawan” to distinguish them from other Ryukyuan languages.

I found a Japanese academic website which lets you search for and listen to equivalents of Japanese words in the Naha-Shuri dialect of Okinawan. It also turns out that Okinawan has even more layers of Keigo than standard Japanese…oh dear. For a 3-day trip, learning how to say “thank you” in two different ways was going to be more than enough, so that’s what I did.

I then used one word for “arigato” with the friendly ladies in a Naha souvenir shop who let me taste the local liquor for free. However, the reaction was not quite what I expected. That’s because they were, let’s say, more senior than me, and I’d used “kapuchi” which was too familiar. They soon put me right though, and by the time I left the shop clutching a bottle of Habu-shu (Snake sake), I had the pronunciation of “Nifii Debiru” for “Arigatou Gozaimasu” down to a tee.

Habu-shu is a strong Okinawan spirit, made by preserving the carcase of a poisonous snake (called “habu” rather than “hebi” as in standard Japanese) inside a bottle of Awamori shochu. It seemed to be ubiquitous in most of the izakayas we visited, and as it’s as strong as vodka but as sweet as brandy, I found it to be a nice tipple for after an evening meal.

On the morning after our arrival in Naha, we took a 2-hour ferry trip to the island of Zamami with only one thing on our minds; to swim in the kind of crystal-clear sea water that’s only found in the warmest parts of the world.

If you plan to visit Zamami for a day trip, the ferry leaves at 10am and the last one back to Naha is at 4pm, so unless you sleep on the beach or have one of the few rooms available booked, you’ll need to make the most of those 4 hours and not waste them like we did trying to find the quietest beach.

The best beach, believe me, is the slightly “busier” one, which would not be classed as “busy” relative to the crowds in Honshu. We tried the quieter one and something took a bite out of my friend’s big toe when he was floating in the sea. The waters around Zamami are host to a few different poisonous fish, such as the flower urchin, the deadly stonefish and the red lionfish – but it wasn’t any of them, because he’s still alive.

In between the beach and the restaurants, we took some time to visit world heritage sites and spiritual havens. The ruins of Nakagusuku Castle give a fantastic view of the Pacific Ocean to the east, and East China Sea to the west. Out of the approximately 300 castle sites in Okinawa, Nakagusuku is one of the best preserved and the style of the old castle walls are markedly different from Japanese castles of the same era. Its ruins are about the same size today as was the castle when the Lord of Zakimi, Gosamaru, moved there in 1441. That’s 112,399 square meters in overall area and 14,472 square meters within the castle walls.

The spiritual haven we visited is another world heritage site called Sefa-utaki, considered to be a “power-spot” in some Japanese circles. Located within Nanjo area, the site consists of a pathway through a preserved forest-like tree grove with large rock formations and a wide variety of species protected by the sanctuary. It is also steeped in history, being mentioned in the earliest recorded myths about the creation of the Ryukyu island chain. On our tour of the natural refuge, a small group of pilgrims were praying within a forest dell, and we were asked to bow on entering and then on leaving the site. This was an important site during the Ryukyu Kingdom period and was regularly visited by the rulers of the kingdom.

Dec 25, 2019—travel
Jigokudani: Monkeys on Ice
Job For IT Engineer